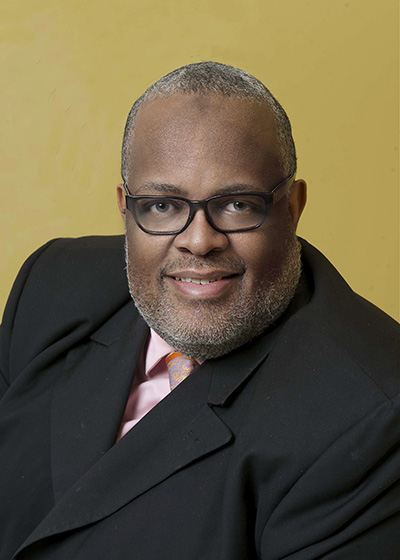 Rev. Charles Hudson was named Operations Manager/Gospel Program Director of KTSU in October 2007.  It was another high point of a career that began in a classroom at Texas Southern University two decades ago, when he decided to return to college to pursue a degree.  A former Telecommunications professor suggested that Hudson go by KTSU to volunteer.  He started as a Production Assistant, writing Underwriting copy and perfecting his skills as a Producer.  Bernard Walker and Rick Roberts, who were General Manager & Program Director at the time, took special interest in Hudson.  Roberts put him under an intensive program to prepare him for an on-air shift, as well as give him guidance as he was completing his college studies.  Walker taught Hudson basic management skills, which Roberts built upon when he became General Manager in 1992.

Hudson started on-air reading underwriter spots, Gospel Calendar and promotional spots, got his first on-air experience as a jazz announcer from 10PM-2AM on Saturday nights, then became a Gospel Sunday Announcer on August 18, 1989.   Roberts named him Gospel Coordinator the next year.

With patience, persistence and prayer, Hudson graduated with a B.A. in Journalism from Texas Southern University in 1993.  Roberts offered him a fulltime position with the station after graduation.  He started as an Administrative Assistant, became Traffic Manager in 1996, where he worked diligently until being named to his current position.

Recognition for his announcing skills would come for Hudson as well.  He has shared the stage with some of the great artists of Gospel Music, including John P. Kee, Shirley Ceasar, Kirk Franklin, CeCe Winans, The Canton Spirituals, Lee Williams & The Spiritual QC’s, Ambassador Bobby Jones and others, including close friend (and fellow TSU Alumnae) Yolanda Adams.  He was named Gospel Announcer of the Year by the Houston Gospel Announcers’ Guild and Texas Gospel Announcers’ Guild in 1998 and was nominated for the National Award in 2000 and 2008.

A lifelong Member of Wesley African Methodist Episcopal Church, Hudson has served the A.M.E. Church on a Connectional Level as Parliamentarian of the Young People’s and Children’s Division of the Women’s Missionary Society.  He is an Ordained Elder in the A.M.E. Church and presently serves as an Associate Minister at Wesley under the Leadership of Pastor Leo Griffin.