During a global pandemic, families will get an opportunity to put more under the Christmas tree this holiday season.  FuelUP & Tava Cares will be hosting a holiday giveaway on Dec. 22 in partnership with The Lloyd Foundation. The holiday giveaway will serve 50 families, or until supplies last, with a host of toys and gas gift cards.

Five of the families will consist of families that have been impacted by cancer.  FuelUP will host the families at one of their eight locations on 11831 Bellaire Blvd, Houston, Texas 77072 beginning at 1 pm.

“The reality is that people are still driving during the holiday season and fuel cost is still a concern for families in the pandemic. We believe that a nice way to give back is to give holiday gift cards for fuel or for snacks while families travel for their last-minute essentials for the holidays,” said Taha Hashmi, Vice President of Fuel Up.

FuelUP is a family-owned and operated chain of gas stations serving eight locations in Houston. The gas station chain has been serving the community for over 25 years. 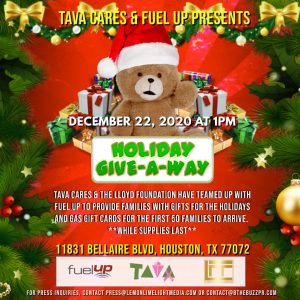 Tava Cares is a Houston-based organization that advocates and assists women who have breast cancer, and their families. They work closely within the community to provide resources for various initiatives throughout the year.

About The Lloyd Foundation:

Families can register via Eventbrite: https://fueluptavacareschristmasgiveaway.eventbrite.com