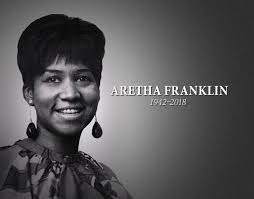 Sheldon T. Nunn – The old cliché’ “once in every blue moon,” is often used to define someone or something that is an indescribable phenomenon that is well worth remembering; in addition, the positive nature they have on society as a whole has a huge impact as well. When one thinks of entertainment, the list of individuals whose impact has changed the way artistic impressionism is received speaks volumes to their ability to keep audiences thoroughly enthralled with their immense talent. “Once in every blue moon,” we experience a Prince, Michael Jackson, Janis Joplin, Jimi Hendrix, Frank Sinatra, Stevie Wonder, Miles Davis, Ray Charles or a Mahalia Jackson; but every now and then a superb beam of illumination affords us a magnificent jewel of delight ─ one that captivates our senses with a brilliance well above any other. When word of their passing circulates, we are shocked, filled with regret and reflect upon the memories we share as a result of their impact on us individually: Aretha Franklin, otherwise known as “Lady Soul and The Queen of Soul” fits the mold of that very special beam of light. Conversely, she as well as other notable luminaries have shown the world what legends are made of. On Thursday, August 16th, the light of this multi-talented “Lady” went dark after a long illness.

As with many singers of Aretha Franklin’s generation, her artistic roots began in her father’s Detroit church (Rev. C.L. Franklin) singing gospel. With that as her foundation, she was able to effectively communicate her vocalese across other styles of music as well, including blues, R&B, jazz and pop. Although she was able to easily slip across varying musical styles, her influences on gospel and R&B were a backdrop for a stellar career spanning more than seven decades. On the world stage, she became the queen of R&B and captivated audiences from every walk of life, including Presidents, Prime Ministers, Kings and Queens, but she never forgot her roots. Much of Aretha’s music was etched in the tradition of the church and the soul of who she was as an artist. She was the first woman inducted into the Rock & Roll Hall of Fame, garnered numerous accolades, Grammys, gold and platinum records that placed her in a stand-alone category all to herself musically.

On August 13, 2018, word circulated that Aretha Franklin was very ill under hospice care surrounded by family and friends at her home in Detroit. Her death on August 16th was reported to be that of pancreatic cancer. Some artists whose likes may never be seen or heard again are expected to live forever, their many fans appreciate their talent in that manner; in fact, their physical presence is what will be missed. As the passing of Ms. Aretha Franklin is acknowledged and we pay tribute to her legacy as well as her contributions to music, “The Queen of Soul” only happens “once every blue moon.” Those individuals who experienced her talent on a personal level during a live performance recognized that her physical presence was just as powerful as her recordings.