PICASSO AT THE LAPIN AGILE 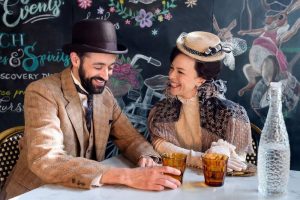 The Alley Theatre brings “Picasso at the Lapin Agile” by Steve Martin to the stage. Directed by Sanford Robbins, the play examines the notion that Albert Einstein and Pablo Picasso, both of whom became great men were close in age and in Paris about the same time around 1904. Martin leaps into a fantastical contemplation of what they might have discussed and who else might have joined them at the Lapin Agile bar. Picasso at the Lapin Agile is the first play ever written by actor/comedian Steve Martin who began his career on “The Smothers Brothers Comedy Hour” (1967 – 1969) where he won his first Emmy Award for Outstanding Writing Achievement in Comedy, Variety or Music.