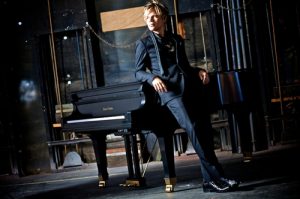 Brian Culbertson is an award-winning multi-instrumentalist, songwriter and producer known for his distinct brand of genre-crossing contemporary jazz, R&B and funk. Mining the urban sounds of musically-rich Chicago, he began his musical studies on piano at age eight and quickly picked up several other instruments by the time he was twelve, including drums, trombone, bass and euphonium. With love, romance and his recent twentieth wedding anniversary serving as his inspiration, Culbertson crafted thirteen new songs that will be released as “Colors of Love” on Valentine’s Day. The seduction begins with the first single, the amorous title track, which is a sensual R&B groove illuminated by lyrical acoustic piano melodies typical of the collection’s contents. A nearly three-month-long U.S. concert tour will bring “Colors of Love” to life in a vivid theatrical production, incorporating video elements in a major way.

Culbertson always brings his very best – and brings the very best out of others – in all of his broad-ranging musical and creative endeavors.