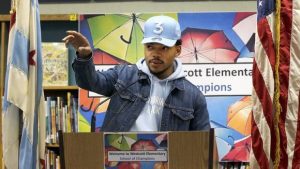 Amid very little fanfare, Beyoncé marked the anniversary of her iconic “Lemonade” album with news that she will be funding scholarships for Black women to attend selected colleges and universities. 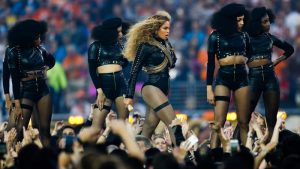 The announcement of her Formation Scholarship Award came in late April. Four Black women will receive the scholarship, one for each of the following schools: the Berklee College of Music (Boston), Parson’s School of Design (New York), Howard University (D.C.) and Spelman College (Atlanta). Howard and Spelman are legendary HBCUs.

The scholarships, which will be good for the upcoming 2017-2018 school year, are said to be aimed at encouraging and supporting women “who are unafraid to think outside the box and are bold, creative, conscious and confident.”

More recently, rapper Nicki Minaj has paid more than $18,000 to at least eight students who needed help with loans repayments, tuition and books, an act of generosity spurred on by a tweeter’s request, and Minaj’s willing spirit. 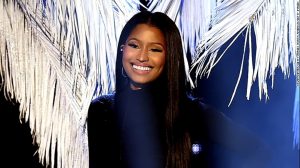 On May 7, Minaj took to Twitter to pick a winner for a contest in promotion of her latest music video, “Regret In Your Tears.” However, when one of her followers came with a request that Minaj instead help pay his college tuition, Minaj offered to not only help the student who made the request but opened it up to others who needed help with college tuition or had educational loan debt.

In her tweet, Minaj stated, “Show me straight A’s that I can verify w/ur school and I’ll pay it. Who wants to join THAT contest?!?! Dead serious. Shld I set it up?”

Within less than a week Minaj had already kept her word, helping eight students financially and planning to help many more.

Artists’ generosity in response to real world challenges of their fans was witnessed earlier this year, as well, when Chance the Rapper donated $1 million to Chicago’s public schools in March and created an arts fund to help schools hard hit by budget cuts. After making his donation, the NBA’s Chicago Bulls announced they would match the 23-year-old’s generous donation. 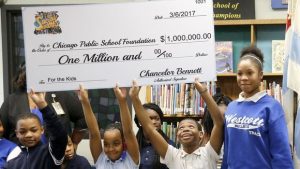 However, Chance, is not finished with his giving. On top of his $1 million gift, the rapper announced the creation of a new after-school arts program for Chicago youth called the Chance Arts and Literature Fund. The Fund will target schools that have experienced decreases in fiver-year graduation rates. Moreover, Chance the Rapper has sent $10,000 donations to an additional 12 schools. 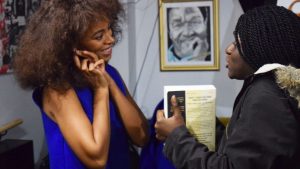 Quietly, Beyoncé’s little sister Solange may have inspired this year’s round of artist generosity. The day after her performance at the Peace Ball in D.C., Solange stopped by Sankofa Video Books & Cafe, a Black-owned bookstore on D.C.’s Georgia Avenue to meet with her local fans and buy them 250 books.

Originally planning to speak at Howard University, Solange came up with a brilliant and generous Plan B upon finding out the school was closed for the inauguration of the 45th president. After asking if the bookstore was willing to host her pop-up event, she announced the book giveaway on Instagram just hours before it was to kick off. Hundreds of people, mostly from Howard, flocked to the store where they received books such as Black Skin, White Masks by Frantz Fanon, Fire Shut Up in My Bones by Charles Blow, The Autobiography of Malcolm X, Americanah by Chimamanda Ngozi Adichie, and nearly all of the store’s works by James Baldwin.

In the April 2017 Essence Magazine, Tina Knowles was quoted as saying one way she worked to instill in her daughters a sense of self was taking them regularly to two of Houston’s icon cultural and conscious institutions – The Shrine of the Black Madonna Cultural Center and SHAPE Community Center.