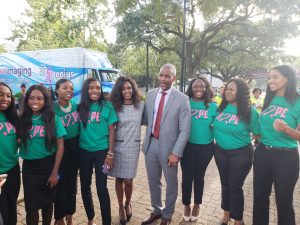 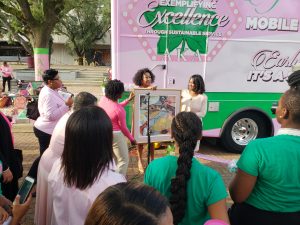 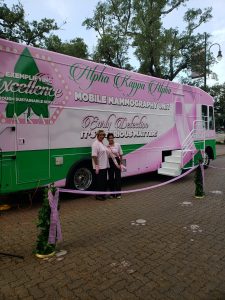 Alpha Kappa Alpha, Inc. wants the general public to know October is “Breast Cancer Awareness Month;” most significantly, the sorority wants to heighten awareness amongst females in the African American community. As a whole, black women have the highest mortality rate of any other ethnic group and the impact of this disease takes a tremendous toll on families from every segment of the community. By any measure, education will help stem the tide of devastation breast cancer causes. The numbers are improving and great strides are being made to help women understand the value of getting an annual mammogram. After all early detection is the greatest deterrent to improving the mortality rate among women, especially in the African American community.

To draw attention to breast cancer awareness, Alpha Kappa Alpha, Inc.’s International President Dr. Glenda Glover was in Houston on the campus of Texas Southern University on October 1st to unveil the sorority’s mobile mammography unit. Welcoming Dr. Glover to Houston included Dr. Austin Lane, President of Texas Southern University, Ms. Karen Jackson, President of Sisters Network, Inc. and sorors from local area AKA chapters. Karen Jackson founded the organization as a result of her own breast cancer diagnosis and to educate women about the importance of early detection. Research has shown in a number of instances black females should begin testing as early as age 35. Annual mammograms and regular self examinations are just two of the ways women can detect problems; again, early detection is most important towards surviving breast cancer.