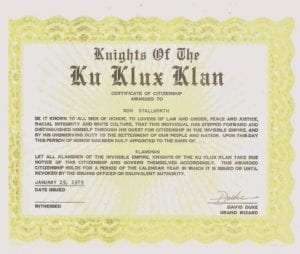 By Sheldon T. Nunn – During the 1970’s, Ron Stallworth has the distinction of being the first black detective in the Colorado Springs Police Department at a time when there were many so-called firsts as a matter of race relations in American society. As a consequence of the times, radical opponents of racial parity including the Klu Klux Klan, Neo-Nazis and the John Birch Society were actively involved in actions to diffuse ongoing efforts to improve race relations in America. Detective Stallworth in a little-known act of civil disobedience proved just how radical many of these groups were. In October 1978, a twist in time occurred when he noticed a classified ad placed by the Klu Klux Klan recruiting new members. He responded with a note citing his disdain for people of color, gay people and certain religious groups. Feeling emboldened, Ron Stallworth responded to the ad in a manner conducive to he being a white person, describing himself as being a white Aryan male wanting to be a part of a movement to stop what he believed was abusive treatment of the white race.

What started out as a curiously impulsive response to an advertisement ultimately became an unforgettable chapter in Klan lore. Thinking nothing would come of his response to the query he dismissed his actions; however, a couple of weeks later Stallworth received a phone call that would change his life forever. The organizer of the local Klan chapter in Colorado Springs called an asked why he wanted to become a Klansman; simply stated, Ron reveled in the hypocrisy of racial equality while also extolling the virtues of white superiority. He threw in rhetoric laced with negative anti-semitic ideas he had experienced growing up in El Paso, Texas. He explained to the recruiter that anyone without Aryan blood running through their veins were members of an inferior race. Hearing Stallworth’s explanation was a stunning display of the kind of people the Klan was looking for, however; his response came with a price Stallworth had not accounted for. . . . . . a request to meet with him!

Realizing the game was on, Ron Stallworth delayed the meeting, recruited a white police officer who agreed to impersonate who he was and then started what would turn out to be a seven-month undercover investigation covertly infiltrating the Klu Klux Klan as a black man. With the help of the white police officer pretending to be he, Stallworth successfully infiltrated the organization and was also able to even fool KKK Grand Wizard David Duke. Stallworth’s ruse was so complete, he communicated at regular intervals with Duke who had no idea he was talking to a black man. The story of Ron Stallworth’s infiltration of the Klu Klux Klan is so compelling, Spike Lee solicited and made a movie entitled “The BlacKkKlansmans” based on Stallworth’s book “Black Klansman: Race, Hate and the Undercover Investigation of a Lifetime.” Directed by Spike Lee and produced by Jordan Peele, the movie attempts to expose the explosive nature of race relations in American culture.